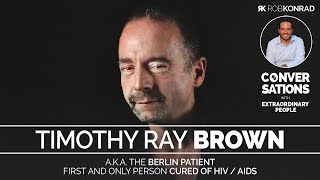 In 1995, Timothy received a diagnosis that would change his life forever: he tested positive for HIV.

In 2006, tragedy struck again – in the form of leukemia. But what seemed to be a cruel twist of fate turned out to be an extraordinary case of fortune.

Timothy’s leukemia treatment not only cured him of cancer – but it also cured him of HIV. He entered the medical history books as the “Berlin patient”, the only person on this planet who has successfully been healed from the deadly disease.

Rob and Timothy talk about his incredible medical journey, what living with HIV meant for him, his work as an advocate against the disease – and much more….

Timothy Ray Brown is a US-born translator and was diagnosed with HIV in 1995 while studying Berlin. In 2006, he was diagnosed with leukemia and in 2007 underwent a procedure known as “hematopoietic stem cell transplantation” for treatment. Out of a pool of 60 matching donors, an individual with two genetic copies of a rare variant of a cell surface receptor was selected, a variant that is known for showing resistance to HIV infection by blocking attachment of the HIV virus to the cell – a trait that about 1% of the caucasian population seems to inhibit.

After a relapse of his leukemia, the transplant was repeated a year later.

Despite discontinuing antiretroviral therapy, three years after the initial transplant researchers could not detect HIV in Timothy's blood or in various biopsies. When the results of his therapy were first presented at a medical conference, Timothy was named the “Berlin Patient”.

Life-Threatening sepsis during the process nearly cost him his life, and Timothy had to re-learn to walk and speak.

Prev017 – Raped at Age 14, She Became a Right-Wing Extremist – And Later Turned Her Life Around