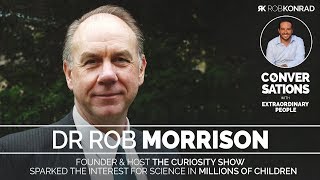 The Curiosity Show was – and still is – one of the most loved science shows that ever existed. Hosted by Dr. Rob Morrison and Deane Hutton from Australia, it was syndicated to 14 countries worldwide from 1972-1990 and sparked the interest for science in millions of kids worldwide, myself included.

The famous curiosity show intro still rings in my head, and the fact that the Curiosity Show YouTube channel (https://www.youtube.com/user/CuriosityShow ) reached 100'000 subscribers in a short time is proof that there are lots of people who still remember the good old days of experimenting in front of your tube TV set, building cardboard yo-yos, watching Rob talk about the “mysterious isochronous curve”, the self-starting siphon, the ames window and more.

I'm really honored by the opportunity to talk to one of my childhood heroes about science, how we can support out kids to spark their interest in experimenting and exploring the world, and about what's wrong with today's education system.

Dr. Robert Morrison is an Australian zoological researcher and science communicator. He is best known to the public from his role co-hosting The Curiosity Show which aired on television from 1972 to 1990. He has written or co-written 48 books about science for the general public.

Morrison is a Professorial Fellow in the College of Education, Psychology and Social Work at Flinders University. He is also a past President of the Royal Zoological Society of South Australia (now publicized as “Zoos SA”). His research has focused on comparative anatomy of the mammalian olfactory system, the identification of animals from tracks and traces, the design of artificial nesting boxes, and techniques to breed animals and birds which face extinction in their native habitats in order to reintroduce them in the wild. He was called as an expert witness concerning dingoes in the case of Azaria Chamberlain's death. He is a founding member of the Friends of Science in Medicine, and he serves as its Vice President. He was awarded the Medal of the Order of Australia for his services to conservation and science communication.

Connect with Rob and The Curiosity Show

Prev013 – The Day My Son Killed My Daughter: Charity Lee
Next015 – He Was Almost a School Shooter: Aaron Stark